My Resource Management Triangle
Producers' job is to manage the available resources to accomplish the creative vision. As someone who likes breaking things to its components, today, I would like to break down what I consider as “resources”.

As a producer, your job is to manage resources for a creative vision.

Whether the final product is a short film, music video or an event – two factors here don’t change:

1- You are managing available resources
2- You aim is to accomplish something, a creative vision

As someone who likes breaking things to its components as much as Baby Yoda likes getting kidnapped in The Mandalorian, I would like to break down what I consider as “resources”.

This will help you manage these resources better and create the best possibility for the creative vision.

I categorize resources into three components:

I consider the resources as interchangeable elements to accomplish the vision. This way, when there is a problem, I can see if I can change the resources I am using to solve it. 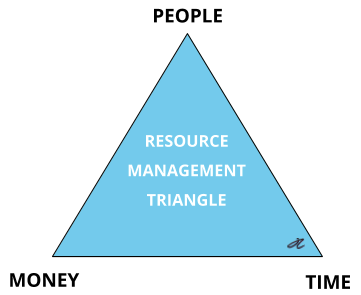 This triangle is something I use, not only in production but in many other parts of my life to create efficiency and optimize the outcome to my favor.

Time: The duration you spend on a task
Money: The capital/funds you allocate for the task
People: Human Resources for the task

Now let’s do a thought experiment:

Let’s see how they are ‘interchangeable’ during production.

Mark raised some funds for his project.
Enough to cover locations, permits, and cast but not enough to cover both equipment and VFX costs. He has to find creative ways to accomplish his project without spending money (that he doesn’t have.)

Choose to utilize PEOPLE instead of spending MONEY:

Choose to spend TIME instead of spending MONEY:

Many times, a free gig means the person accomplishing the gig does it whenever they want.

Nicole has 10K money left over for post-production.
She is considering finishing the post before the festival submissions deadline.
She got prices from 2 vendors

Taking a step back to the resource triangle, Nicole can choose accordingly:

She can go in favor of TIME instead of MONEY:

If Nicole believes that doing it faster and entering the festival is more important than 3K then she will choose in favor of time and spend the 10K for the second vendor.

She can go in favor of MONEY instead of TIME:

If Nicole believes that saving 3K is more important than entering the festival then she will choose to keep the money and choose the first vendor which will take a longer time.

Understanding resources improves her common sense and makes decision making easier. In Nicole’s case, the question can be simplified as: “Is meeting this festival deadline worth 3K?”

You as a producer will be making these types of decisions on a daily basis.

Tell me an example of where you choose a time in favor of money or choose money in favor of time?
Please comment below!

Bonus points for examples of how PEOPLE entered the equation and helped you save both TIME and MONEY. 🙂